This is the first of two very special concerts featuring the best student or recent graduate musicians. At a time when these young people should be stepping out into the world of live gigs there is nothing in the calendar for them for the foreseeable future. In a small way we wanted to offer a leg up and a chance for you, the audience, to see and hear the future of Scotland’s music scene.

Our jazz showcase features four stars of the Royal Conservatoire of Scotland’s jazz course, who have formed themselves into a band just for us.

Born in Glasgow, 20-year-old Rachel Duns has been immersed in the world of music since childhood, beginning classical flute lessons at the age of 7. After taking up the tenor saxophone at 15, she soon after expressed a strong interest in playing jazz.

Currently in her 3rd year of her studies, Rachel is a familiar face on the Glasgow scene and hopes to soon debut her original music with her newly formed Quintet.

As one of the few women on her course, Rachel aims to diminish the gender imbalance by inspiring other young women to get involved in playing jazz.

Josie Girgis is a Glasgow-based alto saxophonist. Having moved from England in 2014 she now frequents the jazz, fusion and blues scenes in Glasgow and neighbouring cities. Having first picked up the saxophone at the age of 16, it was two years later that she began to feel a strong connection to jazz music when she began her studies at the Royal Conservatoire of Scotland. Since then, she has played with various bands and musicians in the Glasgow music scene and within the Conservatoire including Maxi Rootz, the Marianne McGregor Quartet, Fraser John Lindsay’s Blues Incentive and Strathclyde Youth Jazz Orchestra.

Now, Josie has begun to push forward with a new jazz duo Double Take – Jazz Duo which she formed with guitarist Samuel Parkinson. She has also begun writing her own original music which is influenced by the vast array of modern jazz/fusion players she admires. Watch out for her new music!

“His time steady as a heartbeat in stasis. Reminded me of Oscar, Getz, Brown, and Ellis – all drumless but swinging away effortlessly” – Tommy Smith

Having played for several bands throughout Scotland as a sideman, including appearances on BBC Radio 3 and BBC Radio Scotland with Yazz Ahmed and the NYOS Jazz Orchestra, Chun-Wei Kang recently lead his own group at the Glasgow Royal Concert Hall as part of their Late Night Studio Jazz Sessions.

He is currently involved in writing music for a new international jazz project in Nürnberg called Beyond Big Band and has also been named as “One to Watch” by Glasgow Jazz as well as placed in the Top 40 Category of UK Young Drummer of the Year 2018.

All this and he is just 19, our youngest Spotlight performer!

Rusty started her journey in Hong Kong with music lessons from American bass player Flynn Adams. With encouragement from Flynn and the youth music programme Yrock she began gigging in Hong Kong at age 14. At 16 she moved to Kunming, China with her family.

In Kunming she continued to perform, and experienced playing many styles of music from blues to folk to funk, hip hop and jazz. She joined a six-piece Cuban folk and salsa band, Guarapo, with whom she spent a year playing local venues and festivals around Yunnan province.

Rusty was invited to perform with Chinese folk and pop singer Huang Xibei at the 2014 Shanghai JZ Festival. At the festival she attended a masterclass with Marcus Miller which inspired her to pursue a life in music.

Rusty moved to Glasgow in 2014 to connect with her extended family and study physics at Glasgow University. She found out about the existence of the RCS, and decided to follow a dream that had always felt out of reach – enrolling in full-time music education. She has been a student on the RCS jazz programme since 2017, where she is under the mentorship of Mario Caribé.

THE SOUNDHOUSE VIEW:
This is a great opportunity to see some of the most outstanding students from the current crop at the RCS. They’ll give you a glimpse of the future. – Douglas and Jane-Ann

HERE’S A PREVIEW OF THE GIG:

Concert available to view from Monday 1 March 2021 at 8pm

You can book at any time until Monday 8 March 2021 at 8pm, and you have one week to watch it from date/time of booking. Please email boxoffice@traverse.co.uk if you need help booking your ticket. 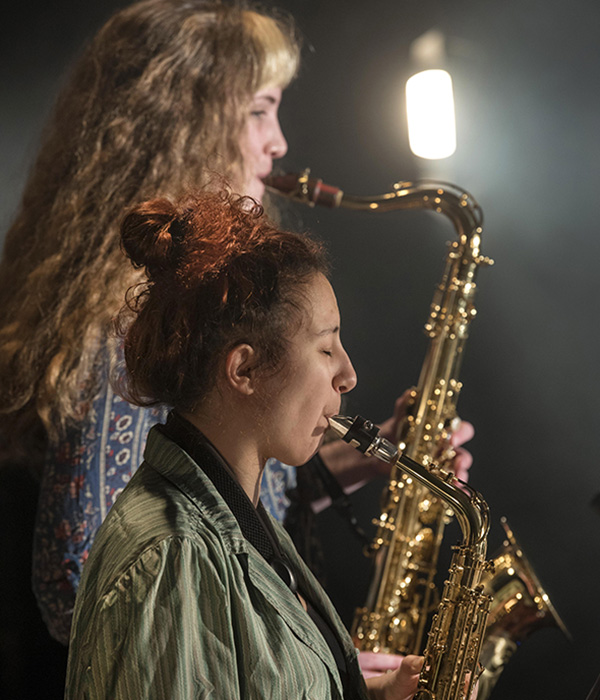