We’re very excited about this show. It features four incredible new acts from the world of Scottish folk. We found two each from the Royal Conservatoire and the University of Newcastle Folk Degree. Please read on to find out more about each act …

Fiddler Chloë Bryce is an emerging talent in Scotland’s folk scene. An individual capable of captivating audiences through her soulful interpretations of traditional Scottish music, she has honed a musical voice of startling maturity despite her tender age. Brought up a Gaelic speaker in the Northern Highlands, her music is informed by a deep regard for the old tunes and songs embedded in her native culture. Whether playing old traditional material or her own compositions, she extends the same care and intimacy to every not she plays.

Chloë is accompanied by Luc McNally on guitar. Originally from Co Durham he is now resident in Glasgow. His distinctive rhythmic accompaniment and flatpicking style have brought him some great plaudits, notably winning a trip to Birmingham Tradfest’s Molloy Award in 2017 with the Iona Fyfe Trio and twice reaching the final of the BBC Radio Scotland Young Traditional Musician of the Year (2018/2019). His solo album Night Off was released in 2020.

Janice Burns & Jon Doran are an Anglo-Scottish duo who formed in 2017, after discovering a shared love of traditional music. They find their songs in archives that span the depths of our history; songs that, regardless of age, tell vivid stories about the nature of life, from the ethereal landscapes of ancient ballads to the urban rhythms of work songs. Their compelling storytelling comes alive through tight vocal harmonies and sensitive interplay between mandolin and bouzouki, with arrangements that balance intricacy with energy. Their dynamic performances are a celebration of their own musical and geographic backgrounds, embracing the differences that connect them.

The duo met whilst studying folk and traditional music at Newcastle University, spending one year at the University of South-East Norway together. These experiences allowed them to hone their craft whilst expanding their audiences further beyond the UK. After three years of working together and performing in notable venues such as Sage Gateshead and Folklub Newcastle, they decided to record their debut EP. It was released in September 2020 to overwhelmingly positive feedback.

Dumfries born, Jenna MacRory is one of Scotland’s up and coming traditional guitarists. In her final year of studying Folk & Traditional music at Newcastle University, Jenna draws from a variety of styles. Jenna breathes new life into old tunes through her dynamic solo guitar arrangements. Her intimate style of guitar playing is best experienced through environments which reflect this intimacy, which has led her to perform in unique locations such as bookshops, abandoned theatres and house gigs.

As Jenna nears the end of her degree she continues to work on her debut album which combines traditional melodies with contemporary production. Coming from an area which lacks a strong folk tradition, she believes that this is integral to make traditional music more accessible to younger audiences.

Evie Waddell (pictured) is a skilled Gaelic and Scots singer, clarsach player, and fiddler from Stirlingshire, currently in her last year of the BMus course in Traditional Music at the Royal Conservatoire of Scotland. She learned her Gaelic through the Gaelic-medium school system. At a young age she was involved in the intergenerational community group Riverside Music Project. Her interest in Scottish Music stems from one individual: Jo Miller, but also takes inspiration from Ivor Cutler, and Martyn Bennett.

Currently Evie is performing in the play MAIM by Theatre Gu Leòr (resuming after lockdown) using her skills in British Sign Language (BSL), acting, music and dance. She is also undertaking a research project and recording songs with Feisean nan Gael’s Fuaran.

Evie’s particular focus is on weaving BSL in with Scots and Gaelic song. She is interested in projects that are visual, interactive and outdoors. Her repertoire has a clear focus on marginalised voices, lives and experiences.

THE SOUNDHOUSE VIEW:
“Collaborating with Jenn Butterworth at RCS and Catriona Macdonald who runs the folk degree at Newcastle University, we have selected four young acts from Scotland who signal that the future of folk music is very bright indeed .” – Douglas and Jane-Ann

Concert available to view from Monday 12 April 2021 at 8pm

You can book at any time until Monday 19 April 2021 at 8pm, and you have one week to watch it from date/time of booking. Please email boxoffice@traverse.co.uk if you need help booking your ticket. 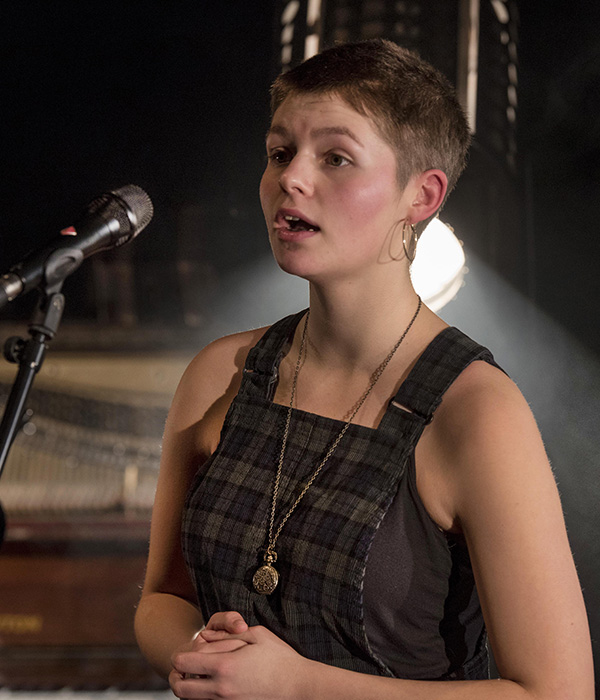