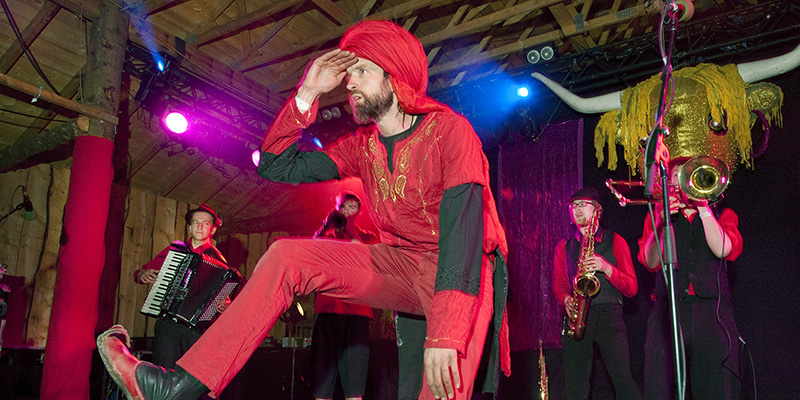 When you were a child what did you want to be?
Spiderman, Batman, Ninja, Cowboy … all the usual, but never a musician!

What would you tell your 16-year-old self now?
“Don’t chuck in that music theory class … it’ll come in handy some day!” I often find myself wishing I had a better grasp of it, but can’t seem to wind the clock back to that level of study.

What are the best and worst things about being a musician?
For me, playing in public. We all love making an instrument sing, and sitting around playing with friends, but when you take that onto the stage, it polarises the experience. There are so many variables, and depending on venue, audience vibe, sound quality, one’s state of mind, the gig can lift you to the heavens, or pop your joy bubble! With experience though, I’m finding the middle way.

What was your favourite ever gig to play?
Hard to say, I’ve come off stage so many times thinking …”That was the best gig ever!” What all the best gigs ever have in common though, is that sense of connection between band and audience where the boundaries dissolve, the music gods join the party, and magic happens!

What was your favourite ever gig as an audience member?
Probably as above! But first and most memorable big gig, Public Enemy in the London Docklands aged 14. I was surrounded by N.W.A. who loved this fresh white boy in their midst and shared their best with me! Not to mention the awesome show that Public Enemy were and continue to be.

Who would play you in Orkestra del Sol: the movie?
I would! I’m partial to a bit of acting …

If you could build a fantasy band who would you include (and you can’t choose anyone in your current line-up)?
Fantasy? Off the top of my head? John Lennon, a parrot, a dwarf, and a Gospel choir. Though in reality that would probably be a nightmare!

What non-musical talent do you have that might surprise people?
I have “domestic talent”…. interpret that how you will!

Why have you decided to play The Soundhouse benefit gig?
You scratch my back, I’ll scratch yours … Soundhouse helps musicians, musicians help Soundhouse.  And as a band we would love to see the ethos of Soundhouse installed in a permanent venue in Edinburgh, the city really needs it!

Tell me a joke.
Worry. Life is so short, and there’s so many amazing experiences to be had, and yet so many people waste so much time, energy and happiness worrying. Now that’s a joke. My mother-in-law told me that one!

Tom Adams will play with Orkestra del Sol at our Christmas benefit concert at The Pleasance Theatre on Friday 5 December 2014. Get your tickets here!