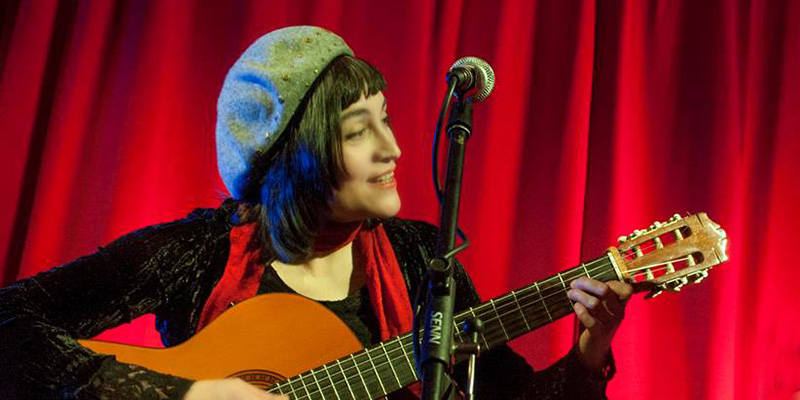 When you were a child what did you want to be?
Singer (true!)

What would you tell your 16-year-old self now?
To watch out for con men, pervs, manipulators and fascists. And to go to Latin America and meet Gabriel García Márquez and Eduardo Galeano.

What are the best and worst things about being a musician?
Best:  Making a difference to someone’s life with a song.
Worst: The egos, musical snobbery and squabbles. Poverty.

What was your favourite ever gig to play?
The first: At a mountain village in the Sierra Madre del Sur, Mexico. Freezing weather. A small plaza, a bit of concrete for a stage and a single light-bulb for lighting. Enthusiastic villagers. Kids smiling (making paper instruments and playing them after the concert). A lovely lady who gave me warm tortillas and café de olla after the gig –these are people who have very little and yet shared their food with me! For that I am truly grateful.
The second: Probably Moishe’s Bagel at Queen’s Hall.

What was your favourite ever gig as an audience member?
Angel Parra (son of Chilean singer Violeta Parra)  in London a few years ago or his sister, Isabel Parra in Chile.

Who would play you in Voces del Sur: the movie?
Faye Dunnaway when she was young (is that allowed?). Oh, alright! Penélope Cruz Sánchez, without make up. 😉

If you could build a fantasy band who would you include (and you can’t choose anyone in your current line-up)?
Astor Piazzolla and me

What non-musical talent do you have that might surprise people?
I write stories in Spanish.

Why have you decided to play The Soundhouse benefit gig?
Because musicians need a space with this kind of outlook … a place that puts art first and that has a heart and soul!

Tell me a joke.
What’s the difference between a folk singer and a large pizza? A large pizza can feed a family of four.

Valentina Montoya Martínez of Voces del Sur will be joining Moishe’s Bagel at the Soundhouse benefit gig at The Bongo Club on Thursday 19 June 2014. Buy your tickets now!